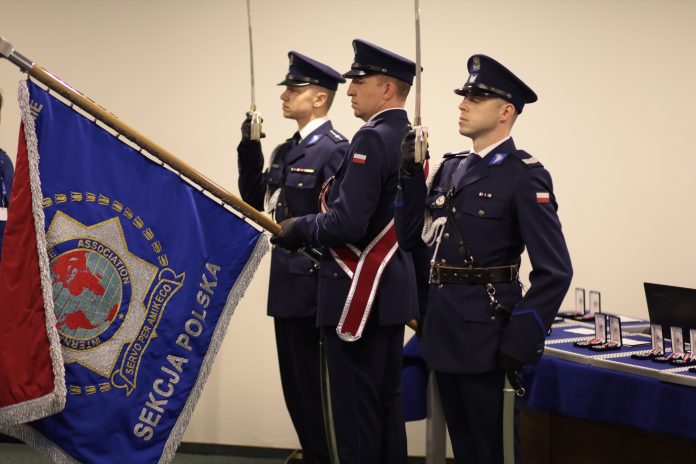 What a remarkable celebration it was. One could say that we went back to the origins, because it was just outside Poznań in the town of Kiekrz, where the first Congress of the IPA Polish Section took place. This time, Polish representatives and 11 international delegations along with the Secretary General – May-Brit Ronnebro met in Hotel Deliciusz, located in Trzebaw, near Poznań.

Such a remarkable celebration could not begin otherwise than with the anthems of Poland and that of our Association. The solemn character which begun at this point continued throughout most of the event. Emotional moments were also to be found. One such was certainly the moment when two outstanding women stood among those honored with commemorative medals. Renata Literacka and Mirosława Kuropatwa – wives of our two friends who had recently passed away and had been honored posthumously in recognition of their work for the Association.

There were plenty of occasional speeches during the celebration. Piotr Wójcik – the President of IPA Polish Section made a summary of the Association’s 30 years of activity and thanked all those who had contributed to its development in Poland. The superintendent Piotr Mąka – the Chief of the Voivodeship Police Department in Poznań and May-Brit Ronnebro – the IPA Secretary General have emphasized the role of our Association and thanked for the previous activities of IPA Polish Section and its members. An award granted to our section from the Independent Police Officers’ Trade Union Association was an extraordinary moment as well. A magnificent Cross was pinned to our banner by the Sub inspector Andrzej Szary – the President of the Independent Police Trade Union Association of the Wielkopolska Voivodeship.

After the official part of the celebration, our guests were invited to taske part in an international conference “Migration crisis at the European Union’s border and the role of IPA on providing humanitarian aid”. The participants could hear the lectures of Zbigniew Tomaszek – the IPA Deputy Treasurer, Aneta Sobieraj – the Vicepresident of IPA Polish Section and Biljana Dulović – the President of IPA Montenegro Section. The presentations gave an overview on the refugee problem in our country and in the Balkan countries. They also displayed how the IPA had been involved in helping people who were fleeing the war-torn Ukraine.

A beautiful finale to the official part of the celebration was a concert by the Air Force Representative Orchestra, which, under the baton of Major Paweł Joks, performed a repertoire especially prepared for the event. The performance was warmly received by the audience and was rewarded with a standing ovation by both Polish and foreign guests.

This celebration could not have taken place without the people and companies who support our association. We would like to thank: The president of BOJAN Browar in Bojanów, Agro-Rydzyna sp. z o.o. company, BYSTRY Meat Factory in Swarzędz, SOKOŁÓW Meat Factory, Selgros Poznań Company. Thanks are also due to: CEO of “Żabka” Polska Sp. z o. o. with its registered office in Poznań, General Director of Browary Lubelskie “Perła” S.A in Lublin, Sweets Manufactory “Pszczółka” Sp. z. o.o. in Lublin and the “GEOMAX” Misztal-Stateczny Sp. j. company in Opole Lubelskie.

Thank you for your organizational support during our celebration!