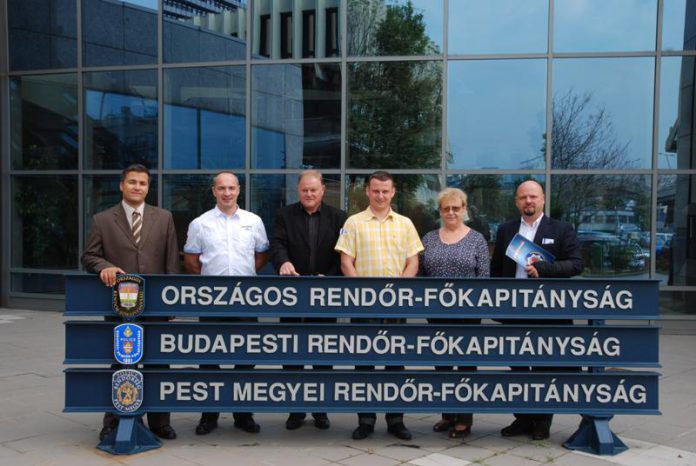 Between 8-20 September 2014 I did an internship in Hungarian town of Encs. It took place under the Placement Programme, thanks to the International Police Association. My supervisor in Hungary was Roland Riczu, a police officer from the District Police Headquarters in Encs.

To the Abaújszántó village (Northern Hungary), where Roland lives, I arrived after 9-hour journey by car. I was met on site and hosted with traditional Hungarian meal, then read the detailed schedule of my stay.

On the first day of our joint duty we went to the District Police Headquarters in Encs, where every day Roland is serving as a forensics technician. On the spot I was greeted by the Commander – police lutenant colonel, Dr. Istvan Antal and Heads of various departments. I was also familiarized with the principles of operation and organizational structure of the unit.

The next day I went to the Provincial Police Training Centre in Miskolc (Borsod-Abauj-Zemplen province), where I had the opportunity to practice my driving skills in difficult conditions using a specially adapted car. This was done through the exercise of driver’s reaction during the skid. Also I honed my shooting skills and familiarized myself with the operation and structure of the Police Training Centre.

The third day of my stay I participated together with Roland in the welcome meeting, which was attended by Commander of Provincial Police Borsod-Abauj-Zemplendr Mecsér Tamás and the President of the IPA Region Borsod-Abauj-Zemplen – Dr. Maria Lovassyne Nemeth. During the meeting we discussed the schedule of my stay. Then I briefly told about the work I do at the police station in Nowa Ruda. After the meeting I looked at the organizational structure of the Provincial Police Headquarters in Miskolc, including Crime Prevention Department and the Laboratory of Criminalistics and their main tasks, and then we were invited by the Provincial Commander for the luncheon.

Another purpose of my stay was a visit to the Emergency Communication Centre in Miskol. It is one of two such centers in Hungary and receives notifications incoming to the emergency number 112. There I have watched the work of operators during talks with notifiers and had the opportunity to see the rescue system in Hungary. Then I went to the police school in Miskolc, where I had the opportunity to familiarize myself with the system of training of the newly adopted policemen and observe their classes during the basic course. I had the opportunity to see the classrooms and simulation halls specially adopted for training needs. It is worth noting that the basic course at the Hungarian police lasts two years.

An interesting experience was a joint duty, ie. I worked  together with Roland during his event-duty. This way I participated in the crime scene examination – ie. the burglary of a detached house.

Next days of my internship I spent in the Hungarian capital, where on the first day in the building of the National Police Headquarters (which is also a seat of both the Provincial Police Headquarters in Budapest and The Municipal Police Headquarters for the district of Pest), a meeting was held with the police captain Dr. Pinter, Gabor Head of the Presidential Bureau and the president of the IPA Region Pest Megyei Szervezete. After the meeting, I had the opportunity to familiarize myself with the building and the different departments of the headquarters and also the conference room, where in December this year will be organized the celebration of the 100th anniversary of the birth of Arthur Troop. I might add that the entire building is a place of work for approx. 3,000 people. Another highlight of the visit was a tour of the building of the Hungarian Parliament. The day ended with a gala dinner, which was hosted by the President of the IPA Hungary Mr. Dr. Tomas Simon, during which I had the chance to talk, among others, about the organization and the programme of the upcoming celebration of the 100th anniversary of the birth of Arthur Troop, and I reported my visit schedule. On the second day of my visit to Budapest, I went to the Hungarian Institute of Forensic Medicine, the ILEA International Training Centre, KERA, CEPOL and the Hungarian Police Museum.

A summary of my stay was held on the last day at the Provincial Police Headquarters in Miskolc, in the presence of the Commander Dr. Mecsér Tamás, Deputy Commander of the Encs Police, my guardian Roland Richu and the President of the IPA Region Borsod-Abauj-Zemplen Dr. Maria Lovassyne Nemeth. Cooperation with Hungarian officials was not limited only to joint duties and visiting the units of the Police and other institutions, but I also had the opportunity to sightsee the beautiful areas of Northern Hungary and Budapest, Hungarian culture and history. In addition, by internship exchange I had the opportunity to familiarize myself with the main tasks and problems of the Hungarian Police, exchange professional experience, as well as the first steps have been made to the cooperation between the IPA Region Borsod-Abauj-Zemplen and the Polish IPA Region Kłodzko. The trip was very fruitful, and I can definitely say that proverb Pole, Hungarian, two nephews …… is most true.