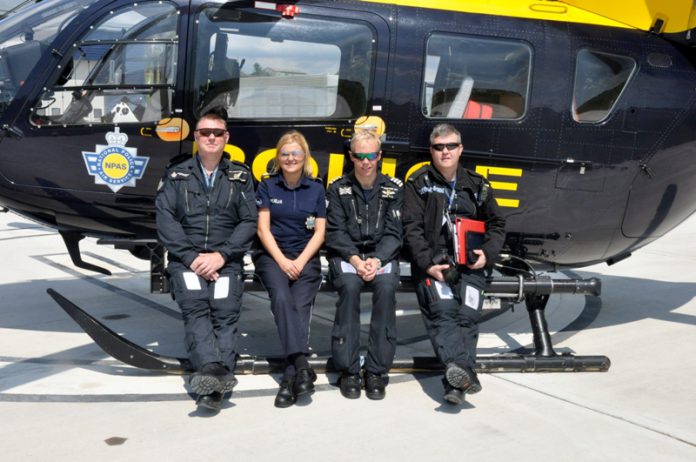 In the period from 17 to 24 June 2014, I was on an internship within the Police Placement Programme at the Provincial Headquarters for Devon and Cornwall, located in Exeter, and at its subordinate police station in St.Austell.

These cities are located in Cornwall, the southwesternmost county of England, situated on the Cornish peninsula. In England I was hosted by Paul Jones of St.Austell Police. The whole stay was full of lots of excitement and interesting experiences.

On the first day after landing at Stansted Airport in London three times I changed a means of urban transport. At the beginning I got the Terravision bus lines to the underground at Liverpool Street. On the trip from the bus window I could admire the capital of England. Next I changed to subway, which took me to Paddington Station. And from there I took the train to my destination – the city of Exeter.

The next two days I stayed at the Provincial Headquarters of the counties of Devon and Cornwall. At first,  along with my supervisor, I was greeted by the Commander – Mr. Russell Middleton, where in a pleasant atmosphere with good English coffee I was familiarized with a schedule of my stay. Following the  conversation I began the internship by paying a visit to the Police Dogs Handlers’ Division, localized in the HQ  where I could familiarize myself with the organization of their work, social conditions and the system of training. I had the opportunity to visit the Police Aviation Section, located at the Exeter airport. I received very interesting information about the specifics of the job. In addition, the English policemen made it possible for me to hold a Eurocopter EC145 flight. It is using modern GPS systems. They wanted to show me their country from a different point of view. We were patrolling coast and some hardly accessible for inland transport places. For me it was an unforgettable journey, showing Britain, which until that day I did not know, as a place with a very diverse landscape, full of wild moors and golden beaches.

Subsequently I visited the Police Armament Section. There I became acquainted with its work and a shooting instructor showed me around the shooting range, told of the weapon and the policemen training systems.

Due to the fact that within the premises of the Provincial Headquarters there is a Police school I had the opportunity to observe the training of future police officers and the support officers. In the UK there is a choice, you can go in two directions: to train a police officer or a support officer. To become a police officer you have to demonstrate the large scope of knowledge, exams are very hard. Recruits who have not passed their police exams often become support officers. Training takes about 6 weeks. Recruits are instructed in handling radio, data collection, securing the crime scenes, the use of force, self-defense, first aid. Their uniforms are very similar to police uniforms.

Very nice for me was a situation in which one of the recruits came to me, speaking Polish. It turned out that this was a Polish girl, living for 5 years in the UK, training to become a police officer. In a very pleasant atmosphere we talked about the policeman profession, comparing the Polish system to the English.

After two very interesting days, it was time to leave Exeter. My next destination was St.Austell – the largest city of Cornwall. Along the way, I had the opportunity to enjoy the beautiful landscape, beautiful beaches and ports. The weather was wonderful, the thermometer showed 28 centigrades.

When I arrived, police officer Paul Jones showed me around the local police station where he works. He introduced me to his bosses and subordinates whom were support officers. With one of them, a woman, Julie Carpenter I was to spend a lot of time, both at work during official patrolling the area as well as outside work, exploring the beautiful seaside resorts such as Fistral, Padstow, Porthcothan. By the end of my stay I was living in the country cottage, located in a small town Zelah, surrounded by hills. Unbelievable experience, just breathtaking.

Every day, after drinking English tea prepared by Julie we were getting into the car to get to St.Austell, to start the next working day. Along with Julie we were patrolling the area on foot, we talked with residents, solved their problems. At the sight of us several times some cars stopped and their surprised drivers asked in Polish what was Polish police doing in England.

At my own request, I was allowed to contact the Directorate General for Prevention of Domestic Violence, so I obtained valuable information on ways of organizing work in this area. In Cornwall there is located a lot of organizations offering assistance to those experiencing domestic violence. All of the organizations  cooperate with the Police. Police officers specializing in this subject shall remain on duty round the clock, advising, developing individual plans for the protection of abused.

One day, along with Paul Jones I went to Fowey. It is a city in the UK, at the mouth of the River Fowey to the English Channel. It’s a small harbor and marina, which is a paradise for boaters. The city is located in the park. During the stay in Fowey I toured the charity that saves lives at sea – Royal National Lifeboat Institution (the RNLI). These are volunteers who provide 24-hour search in the UK. In addition, the RNLI has more than 1,000 rescuers at over 180 beaches across the UK. Police in the UK due to lack of water section, cooperates with that organization if need be.

Then we went to the largest in the UK and probably in Europe, the botanical garden and palm house The Eden Project. Built between 1995 – 2001 in the excavation of an old gravel pit, it consists of several parts, including the most spectacular – domes called biomes, which reached tropical conditions. There are approximately 20,000 species of plants gathered in The Eden Project.

In conclusion, I would like to thank everyone who stood in my way during the internship. First of all IPA Poland for the opportunity to complete the practice, the IPA Cornwall, including in particular Paul Jones for care, Julie Carpenter for hospitality at home, for accommodation and delicious English tea. The trip was wonderful, contributed to the practical exchange of professional experiences and making new friends.