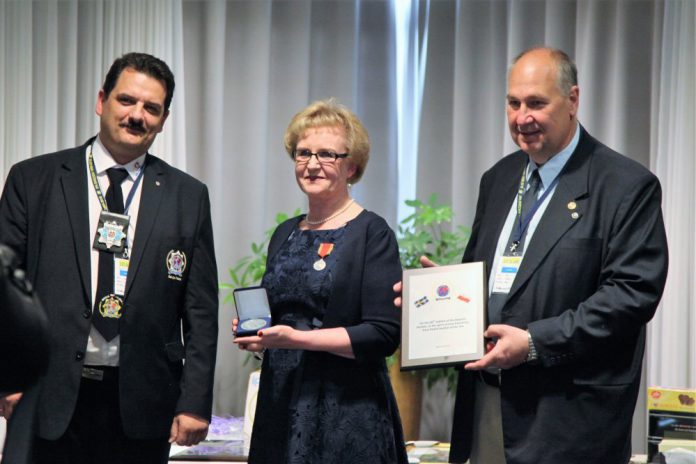 On 10-13 May 2018 in Malmö, Sweden, the National Board and the celebrations of the 60th, diamond jubilee of the Swedish IPA Section took place.

The Polish Section was represented individually by the undersigned Secretary General.

Some statistics. The Swedes have at their disposal the equivalent of 143% of the territory of Poland, and there are less than 10 million of them. There are about 22,000 policemen. However, IPA members (only policemen, other services are not affiliated to the organization) are about 7.5 thousand, associated in 7 Regions more or less structurally corresponding to our Provincial Groups. It is clear from a pure mathematical account that 34% of Swedish policemen and retirees appreciate the values that the IPA advocates, while the ranks of our Section are fed by 10.5 thousand policemen and border guards. Let’s forget the percentages.

But not to be so perfect, I did not meet a single uniformed policeman on the streets of Swedish cities (and I was in three of them). In order to take a picture near the police car, it had to be specially summoned, of course with the consent of the head of the local police unit. The Swedes admit that they have a staffing problem. They also have problems with immigrants who are unwilling to integrate into a society that is multicultural and multinational anyway. Immigrants close in “their” districts, where neither the police nor other services are welcome. Better Swedish law enforcement officers deal with illegal shisha smoking rooms, which are seen as the contact points of organized crime or prostitution. Elimination of the smoking rooms was the subject of a seminar organized as part of the celebrations of the 60th anniversary of IPA Sweden. Only thanks to cooperation with other services and authorities, which are entitled to fine organizers of the illegal practice and the owners of the premises as well, you can see the light in the tunnel. Illegal business is not paying off anymore. Swedish law allows you to impose fines for the same offense if only 24 hours have passed since the first imposition and the illegal situation continues.

I liked the system of conducting the National Board meeting. President May-Britt Rinaldo is equipped with a wooden mace, striking which approves the decisions of the participants, with no votes “for” and “against”. When asked by the speaker whether the participants support a given resolution, voices of support are heard from the room. If there was an objection, the applicant would be asked for the vote, and the one recorded in the minutes. Thanks to the English language education system, which works very well in Scandinavia, basically everyone uses it as their own. On command of May-Britt, if only a foreign guest was in the meeting room, the meeting was automatically held in English.

The jubilee was celebrated in the presence of 20 foreign delegations. Guests had the opportunity to choose
in which – from the proposed forms of promotion of the city and the region – they want to participate. I was able to see the city panorama from the 53rd, penultimate floor of the 190-meter high Turning Torso, visit the 900-year-old cathedral in Lund and the famous, longest (almost 8 km) bridge over the Øresund strait, connecting two countries – Swedish Malmö with the Danish capital. Bridge pylons are higher by 14 meters from Turning Torso. Thanks to a newly met colleague Kim from the Danish Section, the editor of the national  IPA magazine, I had the opportunity to drive along the coast of the Copenhagen region, and even a moment of relaxation at his home in picturesque Skævinge before departure to Warsaw. It is also inscribed in our contacts with colleagues from abroad as the invaluable added value of membership in IPA.

Meeting with IPA Serbia in Krynica