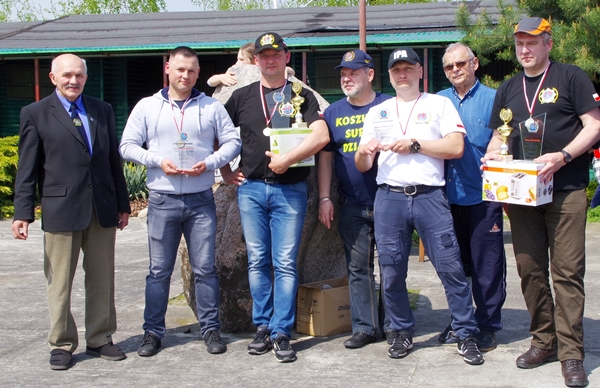 Despite the non-spring conditions and rather unnatural circumstances of nature, we decided to risk and carry out a planned much earlier, combined with the integration of the environments of the towns of Grójec and Warka and with the opening of the summer season „The Shooting Duel of the IPA Regions’ Teams vs. the IPA Supporters WARKA 2017”, Cup of the President of the Masovian Provincial IPA Group.

What was our surprise when the morning of 6 May 2017 welcomed us with a warm and sunny aura. Full of verve and energy we got into vehicles and just before 10 a.m. we „checked in” at Warka shooting range of the Warka Shooting Club where the organizers of the event were waiting for us, ie ROSOMAK Specialized Training Centre with its owner Ms. Aneta Agnieszka Kantorowicz at the head.

There were only four teams in the duel, but the rules of the duel ensured a lot of tension and sometimes even surprise. Teams were in three-man squads (plus one reserve player). After a short run, the miniature rifles were fired from a 50-metre distance drop on the biathlon discs. Each contestant had three separately loaded cartridges. The result was that the team hit the opponent’s plate as quickly as possible and shot down three black discs. The stands came from three generations of fans, and the youngest ones took advantage of the opportunity to have fun.

Competition really raised the level of adrenaline, and to return to normal the organizers after the duel  prepared individual – recreational shooting from the same weapon and under the same conditions for all willing. There was a lot of, because everyone could calmly try their hand.

Competitors who took places 1-3 received cups and medals awarded by the President of the Masovian Provincial IPA Group Zygmunt Kot. All participants of the duel received some material prizes in the form of household appliances, while all the participants of the event took beach games equipment such as balls, mattresses and beach screens, founded by our merit member – colleague Tomasz Filipiak, President of PHILIPIAK Company.

After this part of the event, the mandatory safeguarding of weapons and ammunition in the warehouse, we started just as important part – an opening ceremony of the play and recreation season. Weather really favored us not regretting degrees Celsius and sunlight, including UV rays. Thanks to courtesy of the hosts, ie members of the Warka Shooting Club and CSS ROSOMAK, we sat at tables where we could taste local delicacies such as pork sausages, sausages and grilled meats with healthy and delicious squeezed juices from apples grown in local orchards, and the amber-coloured products of the WARKA brewery.

That is how we happily spent Saturday in cheerful moods and beautiful weather. The Warka area has given us pure and fresh air, letting us believe that the springtime delay is just temporary, and that the season will be full of pleasant sensations and beautiful sunshine, warm summer weather.

Text and photos by: Adam Bajbak