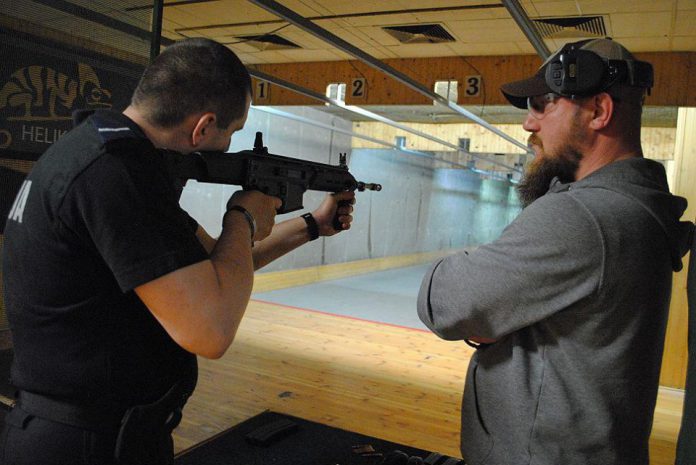 Last year, the IPA Region Radom established contact with the management of Fabryka Broni “Łucznik” in Radom Sp. z o.o. (“Archer” – Radom Arms Factory LLC). We had an idea to organize a shooting tournament together.

The assumption was that the police officers would participate in the event on a weekday, as part of their daily service. It was to be an opportunity to improve the shooting skills, but also to encourage them to join the IPA ranks. Representatives of the Arms Factory authorities gladly agreed to the offer. They promised that they would join the organization of tournament, among others by providing several types of weapons and ammunition. We only had to set the date of the competition. It was not until this year. The event was taken under the honorary patronage of the Provincial Police Commander – Col. Tomasz Michułka, thanks to the favor of whom the teams from the provincial headquarters and all 28 district (poviat) and municipal units of the Mazovian garrison were invited to participate in the tournament. Finally, on May 24, at the “Cel” (Eng. “Target”) shooting range in Paprotnia near Sochaczew 17 three-man teams stood in the ranks. The police shot with the Walther P-99 pistol, the Glauberyt machine pistol and the Grot carbine. The difficulty was the drawing of the type of weapon from which the shooter shot and the sporting character of the shooting – different from the program shots carried out by the police officers as part of their professional development. For those waiting to enter the fire line, a bowling alley was available. The staff of the competition was located in the “Kuźnia Napoleońska” hotel which has the status of an object recommended by the IPA. Here, the Arms Factory has organized a promotional stand, providing police officers with a representative carbine Grot with bayonet, P-99 and PR 15 (VIS 100) guns, FB Eagle air rifles, Grot C16 FB, SKBW and other.

The first competition of this kind showed that it is worth thinking about the next editions. We have gained experience that will undoubtedly impact on even better organization of the future event. We also hope that traditional grapevine will make the heads of the police units that have not delegated their teams recognize next time that it is worth it.

We would like to thank the Head of the Mazovian Police garrison, the Arms Factory, Mr. Wojciech Trzciński – the owner of “Kuźnia Napoleońska”, Jacek Tarka – the shooting range manager, as well as supporting our activity – Jolanta Sowa, Dariusz Kulik, Deltamed Radom company. Special thanks to the sponsor of material prizes – Philipiak Milano.