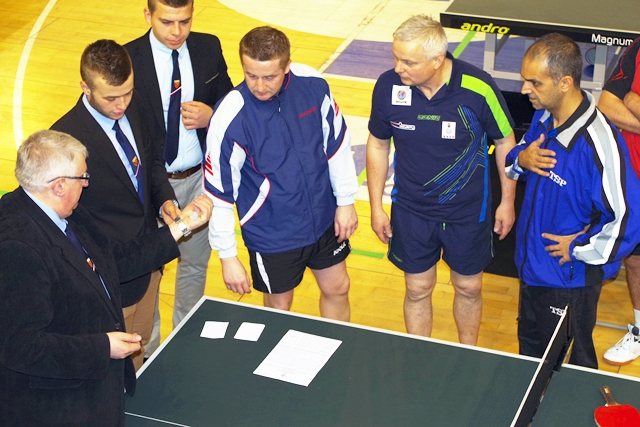 The 5th IPA Open Polish Championship in Table Tennis was held in Radom (100 km south of Warsaw), April 29-30, 2017, in the Municipal Sports and Recreation Centre Hall.

As usual the event was a great opportunity to IPA environment integration, popularization of table tennis as a form of active recreation and selection of the best IPA teams and individual players.

In Poland the IPA brings together exclusively police officers and border guards. The championship is open for all „uniform services”, not only representing the interior ministry. Therefore, we were glad to welcome teams and individual players from the Radom Fire Brigade and Regional Directorate of State Forests. IPA teams have come from all over Poland. Teams from Ireland, Russia and Romania were also interested in participating in the competition. Eventually, we had the opportunity to host two new colleagues from Nicosia, Cyprus, i.e. Stavros and Marinos.

As usual, the tournament was organized by the Radom Region of the International Police Association IPA together with the Provincial Board of the Police Trade Union and the Radom Table Tennis Integrative Club. Fans could cheer up 13 teams, 32 competitors (including two women). On the initiative of the Cypriot colleagues, an international team of IPA has also been formed, with participation of the main organizer, the “godfather” of the event – Mirosław Guziński. The competition has been entered in the sports event calendar of the Polish Table Tennis Association. This time it was re-honored with their patronage by the Provincial Police Commander, the President of the Polish Section of the IPA and the Mayor of Radom, who were also founders of the cups. The organizers have made every effort to conduct the competition safely, in accordance with the rules of fair play and to prepare for the players a pleasant stay in Radom. I dare say, we faced the challenge. As usual, we could count on the logistical and financial support of our supporters and sponsors. Without them organizing the event would not be possible at all. We suggest potential foreign teams to contact the IPA-fellows from Cyprus to find out if it was worthwhile to come to Radom. Special thanks to our Friend, President of the Cyprus Section, Michael Odysseos, former International President of the Association, for making possible participation in the championship of the IPA Cyprus representatives. Individual and group results can be found on our official website at www.ipa.org.pl.