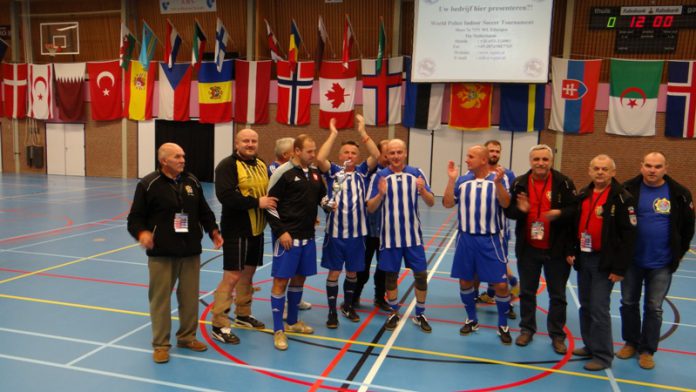 WPIST (World Police Indoor Soccer Tournament) – has been held for the 33rd time.

This time the Marveld Resort in the Netherlands welcomed over 200 teams (2500 participants!) from around the world. The were eight Polish teams registered, including a 14-person delegation of the IPA Radom Region.

Championship held on 12-16 October 2015  was played in several categories: men open, women open, men 35+ and 45+ tournaments. In principle, despite its name, the event may participate teams of all government agencies. In addition to the policemen were so customs, firefighters, a gendarmerie, etc.

Our team was established ad hoc, so we did not have time before the official notification of the team to classify ourselves to the appropriate age category. We played so in the most numerous open class men. We know now that the final composition could play against teams of the tournament men 35+, nevertheless we  had no intention of cheaply selling our skin.

Actually there were 93 teams in our category. During one day of the competitions we had to play eight matches, each lasting 12 minutes, without half-time intervals and switching sides of the pitch. Our rivals were teams of policemen from Prague, Moscow, Berlin, English Sussex, Slovakia, China, Italian prosin officers from Brescia and the French customs officers from Lille. Playing therefore often with “young wolves” gave us the final classification on the spot “33-100” – and such an engraved inscription was put on a commemorative cup. Well, this way or another, during such championship as the WPIST is, everybody is the winner.

Each team had one day off. We chose to go by bus to Amsterdam. From our bungalows in the town of Groenlo the trip to this “city of fun and joy” (as Amsterdam is promoted) lasted two hours.

But it’s also a port city, full of beautiful canals, centuries-old houses, hundreds of thousands of bikes and scooters. I have not found a shop or bar, where service did not speak English. Art lovers will find many galleries and museums. Interesting in itself, because of the shape of the building, is a museum – science cetre “Nemo”. From the observation deck there is a beautiful panorama of the city. This city is really worth a visit, but certainly you are unable to do this in just a few hours.

The WPIST was a huge, impressing undertaking.To make all things work as planned the organizers had to benefit from the support of municipalities hosting the various teams (Groenlo, Eibergen, Lichtenvoorde), an army of volunteers and members of the IPA.

We remain fond memories, but also a matter to think about: will we set up a permanent indoor football team? It might be worth. Only it, after all, of our members depends whether the projects of the IPA Radom Region authorities are successful.

Delegation was possible thanks to the commitment of the participants’ resources, but primarily through the influence of funds from the IPA Radom Region official supporters. Thank you all very much.