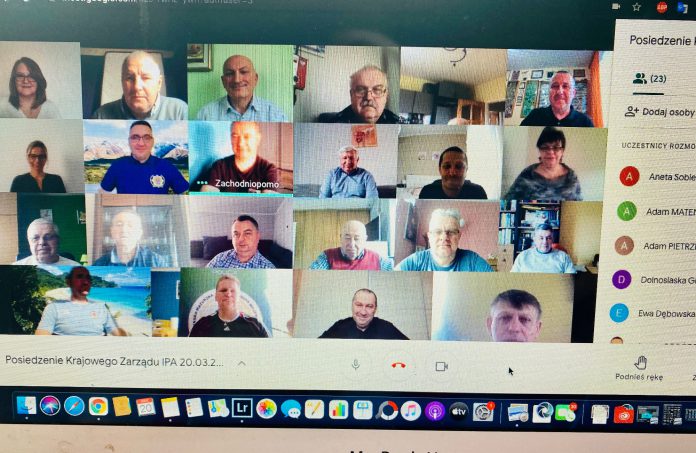 Due to the constant health threat associated with the coronavirus pandemic and legal restrictions in this regard in Poland, the IPA Poland National Board Presidium has decided to cancel the National Board stationary meeting, which had been planned to take place second half of March 2021. In this case, the Presidium has decided to organise the National Board meeting online, and so it was hold on Saturday, 20th of March. The Internet connection not only enabled the members of National Board to see one another (after a year’s break), but they could also hear the IPA Poland President’s report and some brief information concerning the functioning of the IPA Presidium presented by the members of the Presidium, the chairman of the audit committee and the chief editor of “IPA Poland News”. Furthermore, all the various figures associated with the functioning of IPA Poland in year 2020 were presented. The presidents of regional IPA groups had an opportunity to speak and pose questions.

As a result of online voting, the National Board of IPA Poland adopted a number of resolutions, including the approval of the IPA Poland budget for 2021, new IPA recommended facilities, the awarding of the medal “Meritorious for IPA Poland”, granting the title of honorary “Meritorious for IPA Poland”, granting financial assistance to IPA members. The location for the fall National Board meeting has also been determined, and it only remains to hope that it will be held as planned – stationary. We look forward to seeing you in October 2021.