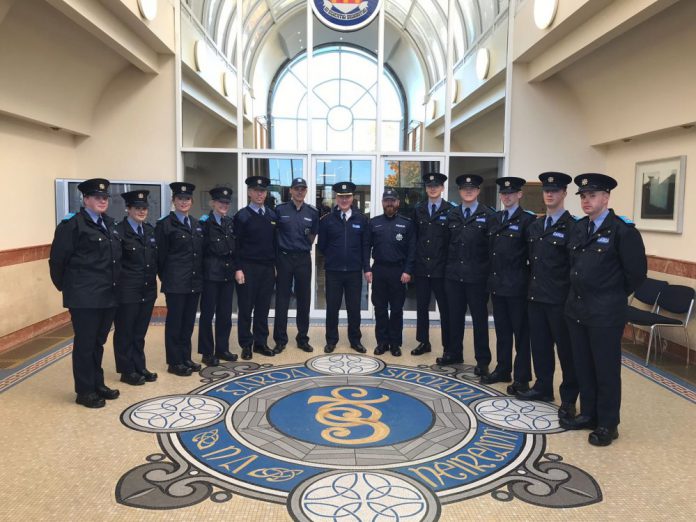 After landing at Dublin Airport Polish officers were picked up by uniformed Garda patrol and brought to IPA House in Dublin, where policemen stayed for three days. During that time they explored Dublin, visited Government building, Court Houses and Garda facilities to learn about the specificity of service in An Garda Siochana. They also met with a group of Polish members of IPA Ireland, all working on different post in Garda, to exchange experience and compare policing in two countries.

On day four, thanks to a member of IPA Hiking Club Siobhain Ni Firbhisigh, policemen from Poland could admire a picturesque sights during a hike to a Tory Hill. In the afternoon they went to Kilkenny, where they met with IPA President Connor O’Higgins, who gave them a tour around town and told about town’s history. In the evening Polish officers could enjoy a night life in Kilkenny, as they visited several pubs with live music and tasting a local brew.

Next day IPA members from Poland went to Birr, where they met Grace Heffernan, IPA Ireland member who they hosted in Poland. She showed them around Garda Station in Birr, where they met Superintendant Patrick O’Callaghan and IPA Ireland Secretary General Carlo Griffin. Later the officers could enjoy beautiful gardens in Birr Castle, what was followed by a trip to Tullamore and a visit to a whiskey distillery Tullamore DEW. In the evening there was a time to meet with local Garda officers and discuss police work over few pints.

On day six policemen from Poland returned to Dublin where they visited Guinness Storehouse and enjoyed the panoramic view of Dublin from the Gravity Bar. After that they went to the Aviva Stadium to observe the briefing of Garda officers securing the soccer game between Ireland and Wales. Later they could keep their fingers crossed for Ireland as they were watching the game on Aviva Stadium.

In the morning of day seven, Carlo Griffin took Polish officers to Irish West Coast, to Galway, where they stayed at IPA Apartment. There they met IPA Ireland Vice President Michael Walsh, who showed them around one of the Garda stations in Galway, and later , over a pint of Guinness, honoured guests from Poland with a membership in IPA Guinness Forum.

On the next day Polish IPA members visited Garda College in Templemore, where they met with Chief Superintendant, had a tour around College facilities, and observed Garda Students practicing their foot drill. The evening there was an occasion for Garda Students to talk with Polish policemen about the police work in Poland and the differences in training programme. Another day in Templemore officers from Poland spent on a hiking trip to a Devil’s Bit and even the rain did not stop tchem from reaching the top. After a tiring day, IPA members from Poland met with members of IPA Ireland Gemma Grogan and Chris Verling.

Day ten policemen from Poland spent with Grace Heffernan who took them to a game of hurling, where officers could enjoy the dynamics of the fastest team sport in the world. Later they went to Birr, where they could spend a nice last evening before returning home. In the morning Grace drove Polish policemen to Dublin, where before boarding a plane, they enjoyed themselves visiting Teelings Whiskey Distillery.

It’s needless to say that the time spent in Ireland on IPA Placement Programme was a great adventure for Polish policemen, and they will surely remeber it well, as it was not only a chance to watch and learn about police work in a different country and to observe how IPA functions and is organized, but also, and mainly, a time spent on making new acquaintances and tightening the cooperetion between two countries.