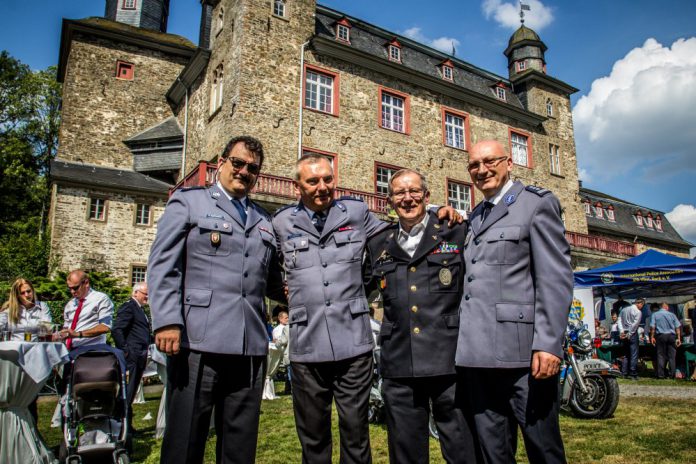 n August 30, 2019, the 50th anniversary of the creation of a unique training centre began in an extremely charming small town in North Rhine-Westphalia. It is called IBZ Gimborn and it has been educating officers from around the world for half a century. By participating in classes organized there, the uniformed have the opportunity not only to broaden their knowledge in the field of police and social issues, but also to meet their colleagues from – sometimes very distant – countries.

Thanks to this, they gain not only professional experience, but also learn about other customs, cultures and even religions. To celebrate this event, delegations from 32 countries came to the Gimborn Castle, including Brazil, Portugal, Italy, Israel, Ireland and Moldova. Representatives of Poland could not be missing from this group. Our country was represented by: Vice President of the Polish Section of IPA Aneta Sobieraj, Secretary General Krzysztof Kapturski, Treasurer Adam Pietrzkiewicz and Deputy Treasurer Robert Literacki. During the ceremony there were official speeches, summaries and thanks, but above all a lot of smiles, pleasant memories and warmth.

After the official part and guest speeches, including representatives of the IPA International Executive Board, the Minister of the Interior or the Board of IBZ, all participants could take part in a police picnic organized next to the castle. In the castle garden, it was full of colorful uniforms and police cars from around the world. There were many attractions for children who eagerly visited this place that day. There were competitions, games, concerts and shows, including police tactics, water cannon, police dog work and an amazing group of police acrobats. The event ended with a banquet with an orchestra concert to which 300 people were invited.

Next year, we will be celebrating 25 years of Polish-German seminars at IBZ. This jubilee training will take place between 25 and 29 May 2020 and will concern the crime of hooligans. The registration for this seminar will start soon. All persons interested in participation, please contact the presidents of their provincial groups or by email with the Vice President of the Polish Section of the IPA Aneta Sobieraj by writing to the address 1vice.prezydent@ipapolska.pl