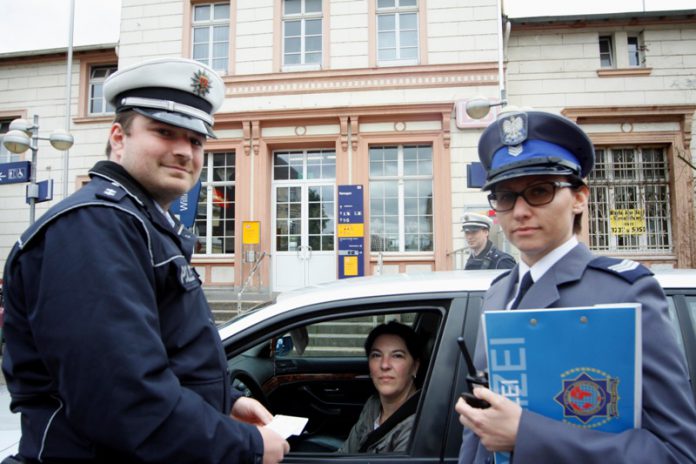 As part of the Placement Programme through the International Police Association, I had the opportunity to participate in the international exchange of police officers.

My return visit with Polizeioberkommissar Christopher Chrolop was held on 05-16 May 2014. The programme prepared by my German colleague was very interesting and rich.

The first day in the service together with Christopher Chrolop I went to the police station in Mayen near the A-48 motorway, where the Motorway Police operates.  The service began with a fatal accident on the motorway. Together with German officers I took part in securing the site of the road accident as well as watched the work of the police during their operations. On the second day, together with my supervisor we went to the Police School in Bonn, where I had the opportunity to familiarize myself  with the schedule of police helicopter pilots training.

I took part in a lecture on pilot training. At the airport I could watch the exercises performed by the pilots, and after exercise, together with the instructor, performed a flight over Bonn in a helicopter simulator. The next day, on duty in Aachen, together with police officers from the Police Station in Aachen I went to the border with Belgium, where we stopped buses traveling from Brussels for people crossing the border illegally.

I could look at the procedures that apply German colleagues. In Aachen we went to the border with the Netherlands, where we revealed drug trafficking. Then we went to the railway station, where a train riding from Amsterdam was stopped at the station and passengers were subject to random checks for illegal possession of drugs. The fourth day I spent in the Police Headquarters in Remagen. I had the pleasure of meeting with the Polizeiinspektion Remagen Commander – Mr. Karl Braun. I was  acquainted with the organization and functioning of the Police unit. Then I took part in a patrol around the city and neighboring villages and also took part in training for police trainees organized jointly with the voluntary fire brigade.

Friday’s service began with the collection of official police car and then together with colleague Christopher Chrolop we went to the Provincial Police Headquarters in Koblenz, where he met with Polizeipräsident Wolfgang Fromm with Polizeipräsidium Koblenz as well as the representative of the International Police Association in Koblenz. The second week started with working closer with German dog handlers. I took part in the training of dogs outdoors and in the building.

Dogs were trained to locate people and incapacitate humans, detection of explosives, drugs, money, the smell of gasoline. On Tuesday at a shooting range with use of simulators and multimedia equipment I could improve my skills in shooting. On Wednesday at the Police Station in Nurburgring I watched a presentation on fatal accidents on the Formula 1 track.

On the last day colleague Christopher Chrolop introduced me to helicopters pilot – Grzegorz Slowik – the policeman of Polish origin – serving in the official area of Remagen. I became acquainted with the work of the pilots, watched the instructional video as well as brought closer to the work at the station and the everyday duty of pilots. An interesting for me was the fact that the German police as an organization does not require the recruits to have the German citizenship when applying to the police service. As a result, I could talk to people of Russian and Polish nationalities serving in the German police. Service in Germany made it closer to me on how the fellow  police offeicers do they job. I could also observe their  daily lives. Thanks to the two-week intensive training, I picked up my level of knowledge and skills in international contacts.

International Gathering of IPA Members and their families in Lithuania