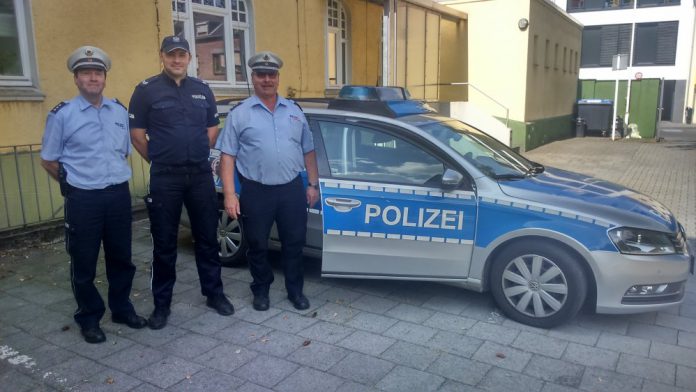 Between 08/20/2016 – 09/03/2016 under the IPA Placement Programme I took a work placement in the town of Mönchengladbach in Germany, where I was hosted by commissioner of the local unit of Police – Michael Rostek.

The officer serves in the criminal division, dealing with public safety in the city and neighboring towns. The permanent task of the German policeman is carrying out reconnaissance before the various planned in the city demonstrations, protests, or the Bundesliga football matches for people professing radical views, including circles of hooligans, in order to prevent the creation of  threat to public safety.

Therefore, I participated in securing two football matches involving the local team, Borussia Monchengladbach, vs. Young Boys Bern from Switzerland, i.e. in a qualifier for the UEFA Champions League, and the match of the Bundesliga first round vs. Bayer Leverkusen. As part of these activities I could observe how preventive services escorted  fans to the stadium.

I had the opportunity to visit all the Borussia-Park, because this is how they call this facility, to be    familiarized with the command centre, where staff, consisting of more than a dozen police officers with access to video surveillance of all the stands, and also entrance gates to the stadium, transitions and car parks, directs the work of all police forces ensuring  safety and security at the events.

I was shown a stadium room for detainees, where they deposit the most aggressive hooligans. Moreover, I had the opportunity to see the work of so-called Spotters, who were discreetly, from the grandstands, watching the so called Ultras groups – the most hard-core supporters, keeping  communicating to the staff information about the attempts of any prohibited activities, as well as remaining in contact with employees of the club and leaders of  supporters circles.

In addition, I was on a beat patrol with two district constables, providing a service at the  Mönchengladbach – Altstadt Police Station. During the execution of their tasks, they visited the residents of the beat, realizing, as in Poland, various writings in legal aid. As emphasized, an important aspect of their work is also to obtain information about people who often come from remote parts of the world in terms of committing crimes and possible manifestation of their extremist, radical attitudes, having police suspected contacts that may potentially result in an attempt to make a terrorist attack.

The night service showed me a slightly different side of the city. I accompanied the intervention patrol from the Mönchengladbach – Mitte Police Station. They, despite several interventions taken meanwhile, eagerly presented me with the nuances of this type of service in their area. German colleagues showed me places at risk, where it often comes to struggles, night disturbance or drug use. As it turns out, this type of event occurs, just as in Poland, frequently during the weekend, when many people spend their free time visiting clubs located in the city centre, while the method of intervention is often similar to that in our country.

During my internship we also visited the Police Headquarters in Venlo, the Netherlands, located just near the German border, where I was presented the work of local officers and the organizational structure of the local police unit. Officers discussed issues of tasks related to combating cross-border crime, which occurs in their area, especially when it comes to drug trafficking. The Dutch showed me a modern forensic laboratory, in which, using appropriate testers, as well as the devices, they can determine the type and structure of many kinds of popular drugs.

In my spare time, along with German colleagues I had the opportunity to visit apart from Mönchengladbach, also nearby Düsseldorf, which is the cultural and business heart of the Nordrhein-Westfalen Land. On the one hand, impressive modern offices of the biggest German media, the impressive skyscrapers of banks and companies from the financial sector, on the other hand beautifully situated promenade along the river Rhine, where you can find many pubs, serving local dishes and alcoholic beverages. My German partner invited me to one of them for a traditional German dinner, during which I could enjoy a local beer Bolten, thanks to which the region is famous throughout Germany.

In conclusion, I must point out that the time spent on my placement has passed extremely quickly and intensely. I not only could get to know aspects of work of the German and Dutch police, but also met some great people. I returned to Poland with luggage of extraordinary experience, interesting insights and conclusions.