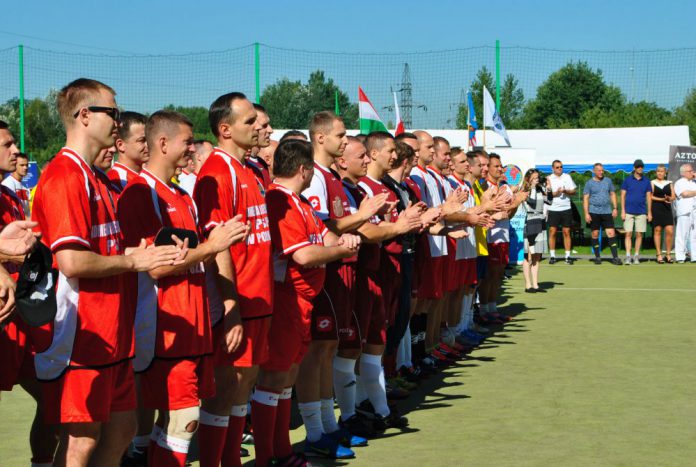 In August 2016 IPA Polish Section Region Poznan organized the 18th edition of International Football Tournament with 15 teams including the representatives of IPA Italy and IPA Hungary.

This sport event is a permanent part of the history of Region IPA Poznan, under the idea to integrate different communities through sport competition.

Although over the years the venue of the event was changed, the same IPA members were participating, still being full of enthusiasm. As every year they gathered the teams represented Hungarian Police, Polish Fire-fighters, Detention Centre, Polish Army, Poznan Municipal Police as well police units from Poznan province. This year’s games were under the honorary patronage of head of Poznan County, mayor of  Poznan Municipality and Regional Police HQ.

Before the start of the tournament, the players, guests and fans were gathered in  a minute
of silence honoured the memory of the earthquake victims in Italy. The tournament
was opened in presence of Polish IPA President, commanders of Regional and District Police HQs and IPA colleagues who organized the first editions of the event.

The games lasted for two days with the teams showed the great fighting spirit.  The winners were the team of Bydgoszcz Police HQ, Poznan Detention Centre and IPA Branch Jarocin. The sport cup as the Most Experienced Player, quite deservedly, received Janos Szigili
from Hungary who was participating in the tournament for the last fifteen years.

The organizers would like to thank to all the players who were participating in the competition for their willingness, commitment, collegial rivalry and a great spectacle!

The description of the photo:

002 – Opening ceremony of the tournament