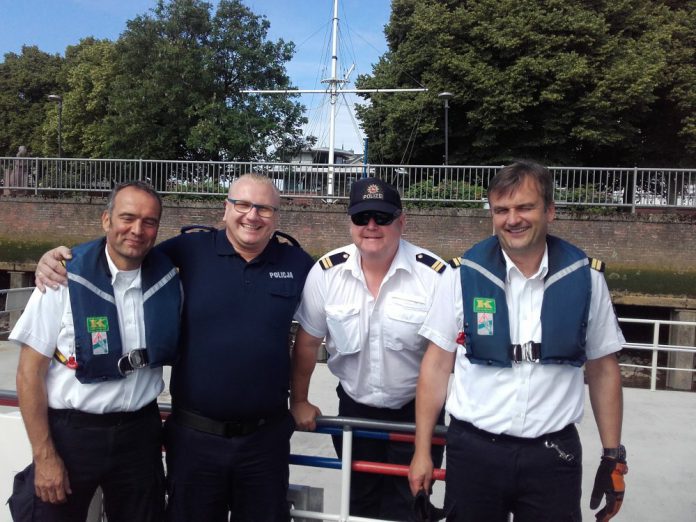 On 26 June this year, in the framework of the IPA international cooperation I went from Kalisz to the city of Oldenburg in Germany in Lower Saxony, to the German Police Commissioner Hannes Matzke who hosted me for two weeks.

The first day we spent in Hannes’ house talking about our work, responsibilities, etc. Monday, June 27 began with a visit to the police station where Hannes Matzke serves in the town of Brake, away from Oldenburg at a distance of 35 km. The police station in the town of Brake is a place of work and service for about 60 police officers and civilian employees. There is a patrol department and also a criminal department. We started the day with being greeted by the station commander and the other officers. I had a chance to participate in the briefing to the service and then I was shown the police station premises and its equipment. After the forenoon spent in the station we went back to Commissioner Hannes Matzke’s place where we rested before the night service. At 9 p.m. we started the night service, together with Commissioner Joanna. The service was uneventful. During the service we performed vehicle inspections and took actions in relation with two burglary of vehicles where the unknown perpetrator broke the window glass with a stone of  Volkswagen Tiguan and Volkswagen Golf, and stole the vehicle interior portfolios with some money and documents inside. Just at the end of the night shift we received notification of breaking into a bakery. We went to the place and only assisted, as the activities were conducted by forensic technicians from the Police Headquarters in Delmenhorst, which is the superior unit to the police station in Brake. We finished the night shift at 7 a.m.

The Delmenhorst / Oldenburg-Land / Wesermarsch police control tasks include, inter alia, the fight against crime, road safety, prevention and safety – on the basis of the Law of Lower Saxony on security and public order. At the very beginning we were hosted at the office of Delmenhorst Police commander, who talked about the fact that under the “Niwex” Programme, under which the exchange of experiences between German and Polish Police is being performed, he had an occassion to host the Konin Municipal Police Commander, and before autumn of 2012 he visited Konin himself for a few days and had the opportunity to learn about the specificity and diversity of service of the Konin policemen.

After the ceremonial welcome I had the opportunity to visit the headquarters’ buildings, where there is a.o. a shooting range. I also met a policeman of a Polish origin, who has lived in Germany since he was eight years old, and who has been working in Delmenhorst Police department for a few years now.

On Wednesday, June 29 during the 1 p.m. to 9 p.m. afternoon service I took part in a court hearing as Commissioner Hannes Matzke was summoned as a witness. I was greeted by the Director of the Brake Court and also had the opportunity to meet officers of the German Prison Service “Justiz”. The rest of our shift passed on servicing two road traffic collisions and on public intervention, during which two people were placed in police custody.

On Thursday, June 30 during the 7 a.m. – 1 p.m. morning service we were invited to the Main Command Center KGO Oldenburg (Kooperative Großleitstelle) where emergency calls are received by the Police, Fire and ambulance services. The rest of the service was uneventful patrolling the area and controlling vehicles on Polish license plates.

Friday, the 1st of July we had a night service (9 p.m. – 7 a.m.). During the service we did some inspections of vehicles and were patrolling fairly large area of the Police Station in Brake – the far away town is located at a distance of 50 km from the station.

Sunday, 2nd July and Sunday, 3rd July were our days-off, so we spent them on resting and walking around the Oldenburg downtown.

On Monday, July 4 during the morning service from 7 a.m. to 1 p.m. we were invited on the Brake Water Police patrol ship cruise (Wasserschutzpolizei) during which we were patrolling the water body. I also had the opportunity to steer the police ship. Water Police officers told me that in the framework of international cooperation of water police units they had had an opportunity to participate in an exchange with their colleagues from Romania. After the cruise we went on a provate home intervention and then to the station in order to prepare the documentation of the declaration for damage to the paintwork and tires on vehicles parked in the area adjacent to the showroom.

Tuesday, July 5 we started with a visit to the Police Academy of the City of Oldenburg. At 08:00 o’clock, I was greeted by the lecturers staff in the staff room. Then I took part in the training of the academy students in the field of fx weapon dynamic shooting (firearm ammunition with the contents of the paint). Then I participated in the classes of science to carry out roadside checks and street interventions. After the classes I had the opportunity to visit the area of the academy. That same day, I also participated in the night service (9 p.m. – 7 a.m.), during which we did some inspections of vehicles (mainly Polish license plates) as well as patrolling the area.

Thursday, July 6 I participated in the afternoon service (1 p.m. – 9 p.m.), during which we performed vehicle inspections and patrolled the adjacent towns.

Friday, July 7  was the day of my last service at the Brake Police Station. During the morning shift  (7 a.m. – 1 p.m.)  the commander of the entire station crew solemnly said goodbye to me. I returned to Poland on the night of Sunday to Monday, July 9.

They were for me, no doubt a great two weeks during which I acquired a large experience, met wonderful people who shared with me their experiences acquired by their years of service and often beyond the border of Germany, as even during international missions in Kosovo.

My presence as “the third” in the German Police patrol was big but pleasant surprise for Polish drivers, who were  controlled by my German colleagues.