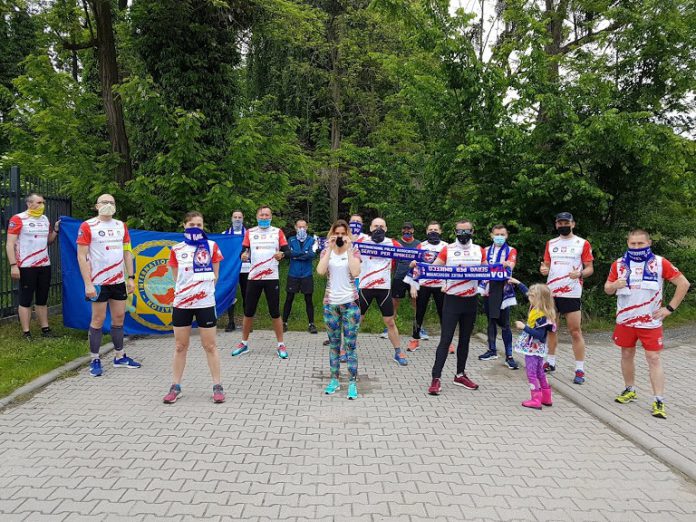 This year has not started successfully. The coronavirus epidemic ruined the plans for sporting rivalry planned by members of IPA Region Lower Silesia. And the plans were very ambitious. It was 2020 when the policemen were to start a new project – the Running League – the first such an initiative in Poland!

Unfortunately, the debut was not a success, and it was not the organisers who were to blame. Due to the coronavirus pandemic it was impossible to participate in races that were part of the League: The Ślężański Half Marathon, Wrocław Night Half Marathon, H2O Half Marathon, as well as Toyota Wałbrzych Half Marathon, all have been cancelled. Members of IPA Region Lower Silesia had to change their plans. Training sessions with Mariusz Cieślak – a coaching champion – have also been suspended. However the policemen came up with an idea how to replace the League and return to training and to sport competition…

This year marks the 70th Anniversary of the International Police Association’s foundation by Sir Arthur Troop in 1950. The police officers from Lower Silesia thought: „How about we celebrate it in a sporty way?”, and as soon as some of the restrictions were withdrew, they decided to organise a challenge aimed not only at getting back to training and running competition, but also at the sporty celebration of the IPA Anniversary.

The general idea of #70IPAChallenge was simple: to run 10 kilometers by 7 members of IPA in the shortest time possible, and according to the motto Servo per Amikeco, the time of the last competitor at the finish line counts! Location: a beautiful park in Szczodre, placed in the buffer zone of the Wrocław agglomeration. The route was suggested by IPA Wrocław member Joanna Woźniak-Cieślar, who took the highest podium in cross-country competitions more than once. And she knows the park and its surroundings inside out, as it is not only the terrain where she trains, but also the area of operation of Długołęka Police Station where she serves as a Deputy Commander.

The competition was fierce and the fight went on to the last meters! Despite the enormous effort put into the race, coach Mariusz’s team had to recognize the superiority of their rivals coached by Szymon. At the finish line all of the competitors, with the last breath, agreed that this sport challenge should be continued in order to celebrate the Anniversary of the Assotiation by as many people as possible.

Therefore, following this new social media trend of challenges, they nominated to #70IPAChallenge, a relay race 7×10 kilometers, as follows: IPA Region Jelenia Góra, IPA Region Nowy Sącz, IPA Mauritius, IPA Germany, IPA Canada and the Police Headquarters in Dresden, just beyond our western border. Members of IPA Lower Silesia hope that the nominees will accept the challenge and join the sport competition to promote the motto of our Association – Servo per Amikeco, and will nominate further IPA members in the world to join in the competiton!

Delegations from 32 countries in one place – 50 years of IBZ Gimborn!